Christin Gorman, the voice of reason in the public sector digitization process 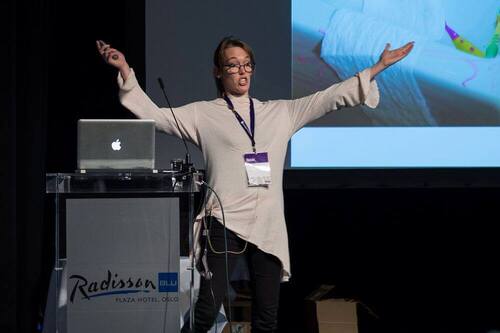 Having coded for more than two decades, Christin Gorman today works as a programmer at Kodemaker, where she’s been for the last 3.5 years. Gorman became known in the Norwegian Java community for her epic talks at JavaZone where 3 out of the top 12 talks of all time are hers.

She started her post-graduate career in the oil sector, after graduating with her Masters from the University of Aberdeen in Scotland in 2003. After a feeling of cognitive dissonance between her belief in environmental protection and her work in the oil sector, she moved over to the booming consultancy industry in Oslo. At the time many large consultancy companies were competing to build, and building, the next generation public sector under a process governed by calls for bids and largely fixed price contracts.

Here she saw, together with so many others, a process that was not only flawed, but fundamentally broken. She decided to try to build public sector from the inside, at Husbanken, but the cracks in the process were only just showing, and she moved back to the private sector to Kodemaker.

She has continued to speak, however, on the topic of software development for the public sector both in written form and on stage. And has over time become the voice of reason in the public sector digitization process. Her talk at Trondheim DC 2016 entitled “OFFENTLIG IT V2.0” is a must see.

She has not only criticized, however, but also cheered on the process undertaken, for example, at NAV, the Norwegian Labour and Welfare Administration, where they took the development process back in-house and built a strategy that could not only tackle the technical debt, but also build new functionality for the people of Norway. Gorman believes that full ownership, and focus on the end user, is the only way to build high quality systems. Here is her talk from JavaZone 2015 on writing sustainable code.

How to make your code sustainable - what they don't teach you - Christin Gorman from JavaZone on Vimeo.

A little known fact about Gorman is that she was on the most popular children’s show in Norway in the early 90’s “Borgen skole”. And though she’s had a computer from she when she was 6, and did IT courses in high school, she didn’t really start coding until she began university at NTNU in Trondheim in 1998.

Personally, I was in the audience for her epic 2011 lightning talk where she equated using Hibernate with using cake mix, sending a powerful message to the Java community to take back the knowledge and skills needed to build real world quality systems.

Hibernate should be to programmers what cake mixes are to bakers: beneath their dignity. from JavaZone on Vimeo.

Runa Sandvik applies security to the world of journalism
Lotte Johansen, improving UX for everyone with web accessibility